Trees may it be for worship, the one that we climb, a source of medicine, a representation of poetry and arts, a subject for many mythical legends, the most visited attraction, the Earth’s protector, whatever it is for –these natural wonders have witnessed people’s lives past from generations and they’re the most silent living thing ever-created that makes life more meaningful. Trees are amazing and their powers to protect us outlive us for centuries.

Let us step our foot forward away from resentments and join me, walk from these bulbous oddities to evergreen giants, and get lost in the woods while trees still exist.

Trees plus butterflies, doesn’t it look so whimsical? Can you imagine living in a forest filled with butterflies? Well, you can imagine that now because it actually exists. The Oyamel Forest in Mexico is the home of not just hundreds but MILLIONS of different butterfly species that migrate in one place. Even the scientist couldn’t imagine how almost all of the butterflies in the world meet halfway. Scientists believe that it’s a magnetic pull that brings butterflies closer together. They travel to reach the destination in Oyamel in October and stay here ‘till March. It’s their ideal temperature to get through the winter. 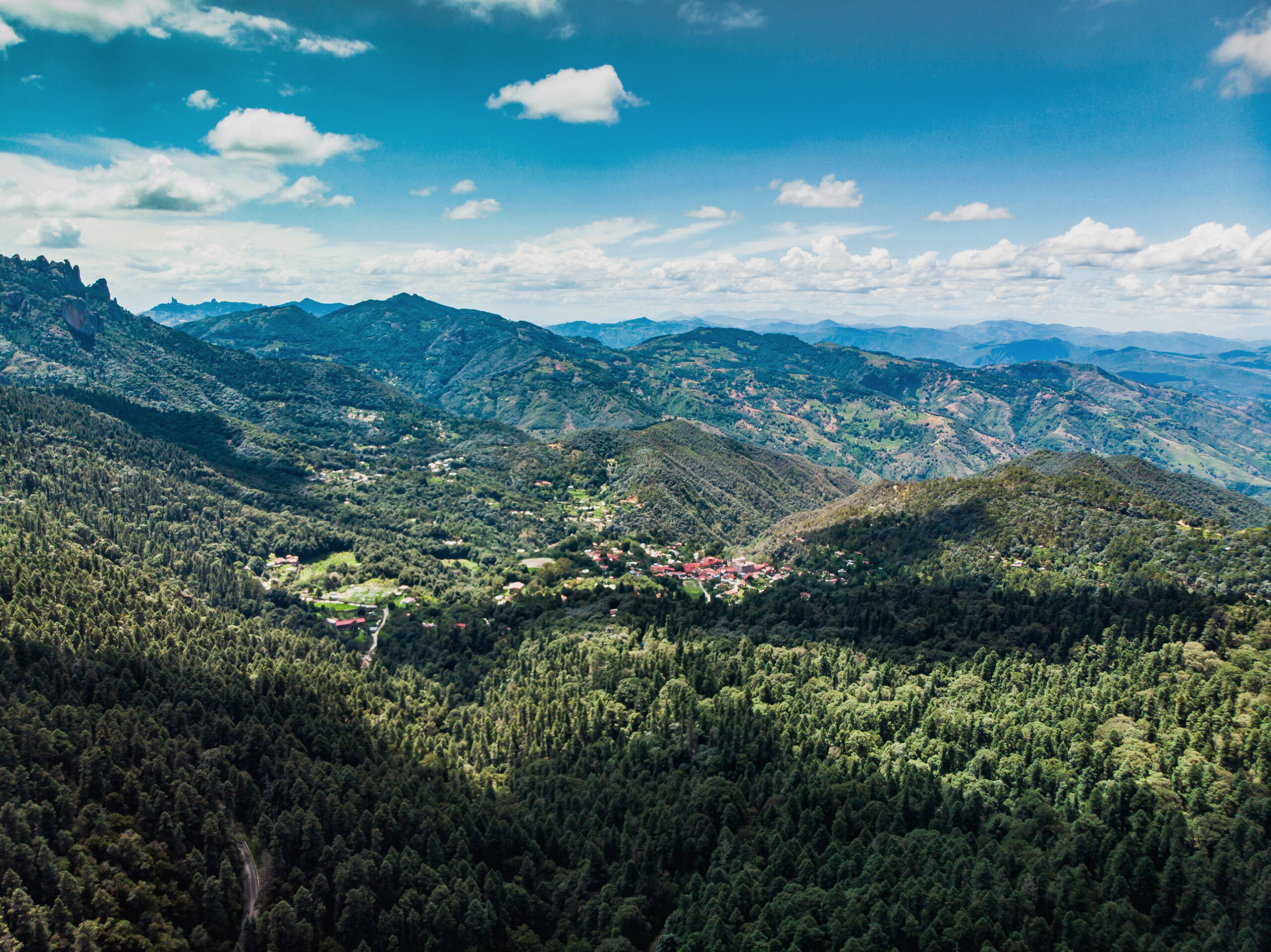 Redwood National and State Parks are located on the Northern Coast of California and Oregon. Woodlands are abundant with a very moist climate because it’s near the California coast. The ecosystem has been preserved over time. This does not only offer an inexhaustible supply of lumber but a shelter for hundreds of animal species. You will love to see the giant tree with a staggering height of 300 feet and about 20 feet tall. 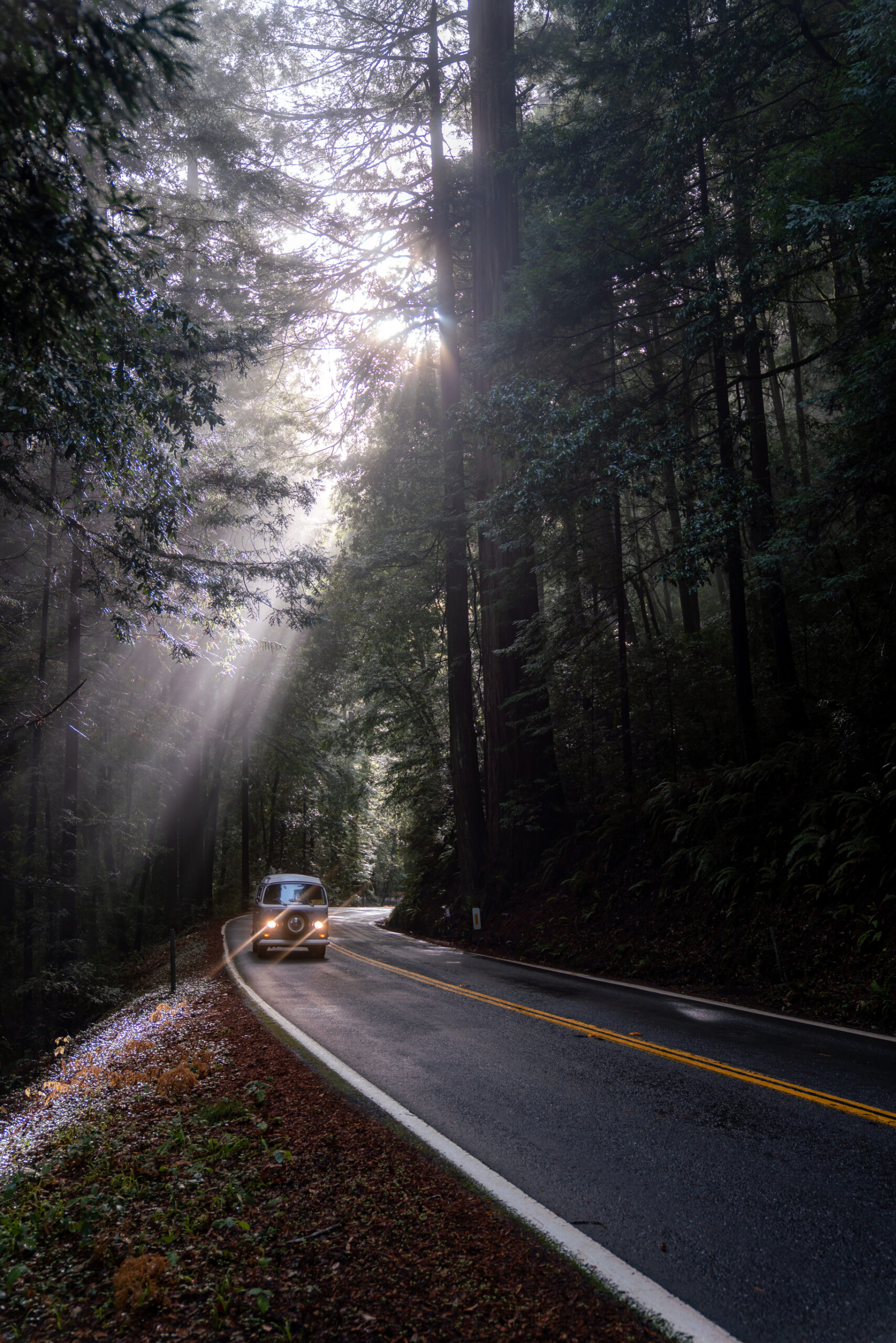 Baobab trees, mostly known as ‘Mother of the Forest’, are a legacy in Madagascar. It stood like a tower over dense scrubs. However, over the years the country drew its population and cleared the forest land, leaving only the baobab trees, which the locals preserved for their own sake. Mother baobabs can live up to 2,800 years and grow 98 feet in height. This bountiful tree can be found in parts of Australia, Africa, and the Arabian Peninsula. Also, to any surprise baobabs can be used in the production of ice cream and antioxidants. There are nine various species of baobabs and six of which can be found in Madagascar. 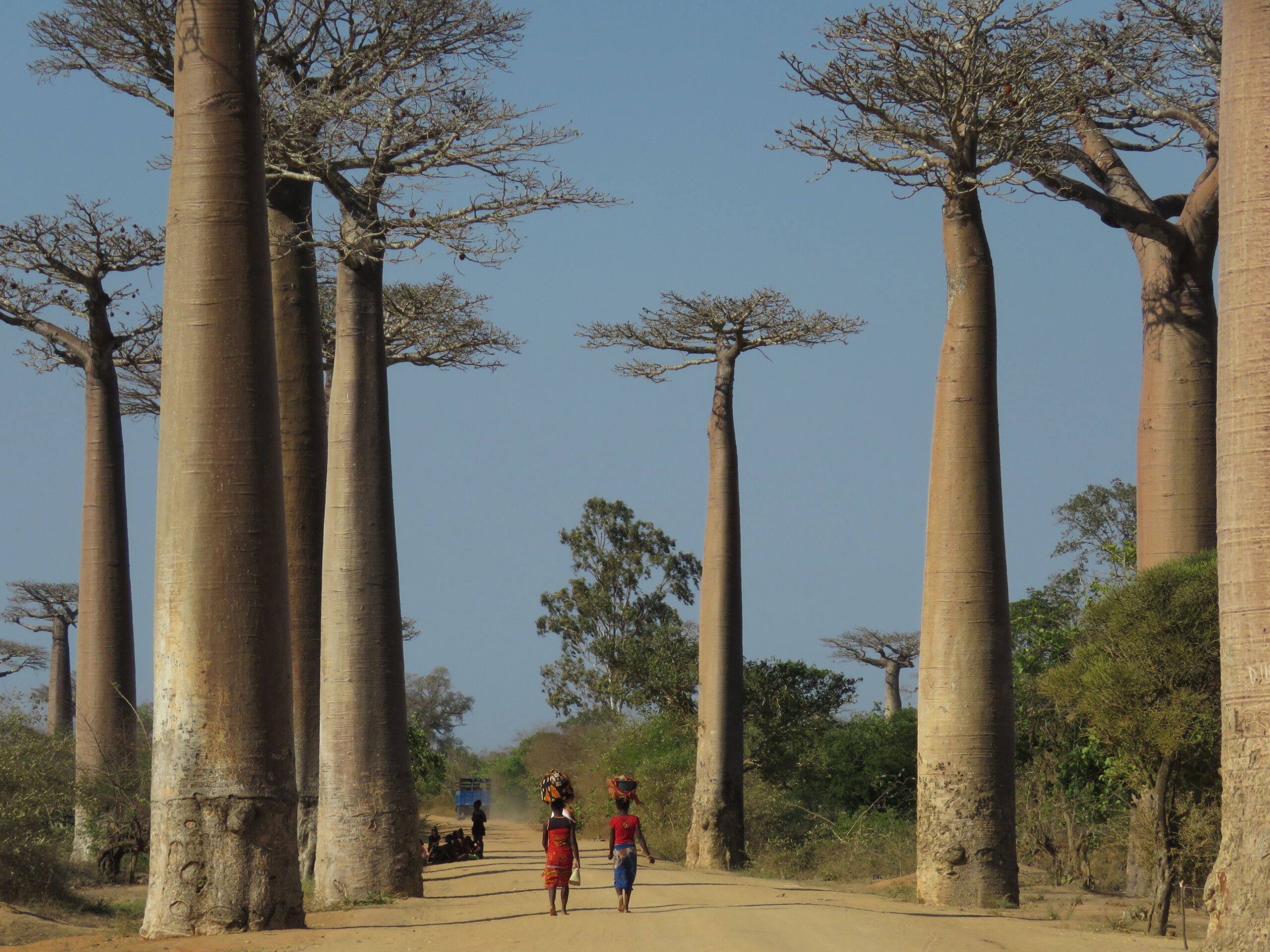 The Angel Oak Tree in Johns Island, South Carolina is one of the Southeast’s oldest living oak trees. The fairytale-Esque oak tree here is estimated to be over 500 years old. Its branches are like roots that grow upwards and reach in all directions, with some reaching the ground’s surface and diving underground. You can tie your hammock everywhere and sit down while pulling your unfinished book. When you have the chance to be here, don’t forget to approach the tree because there is this profound feeling you can have while you’re here. 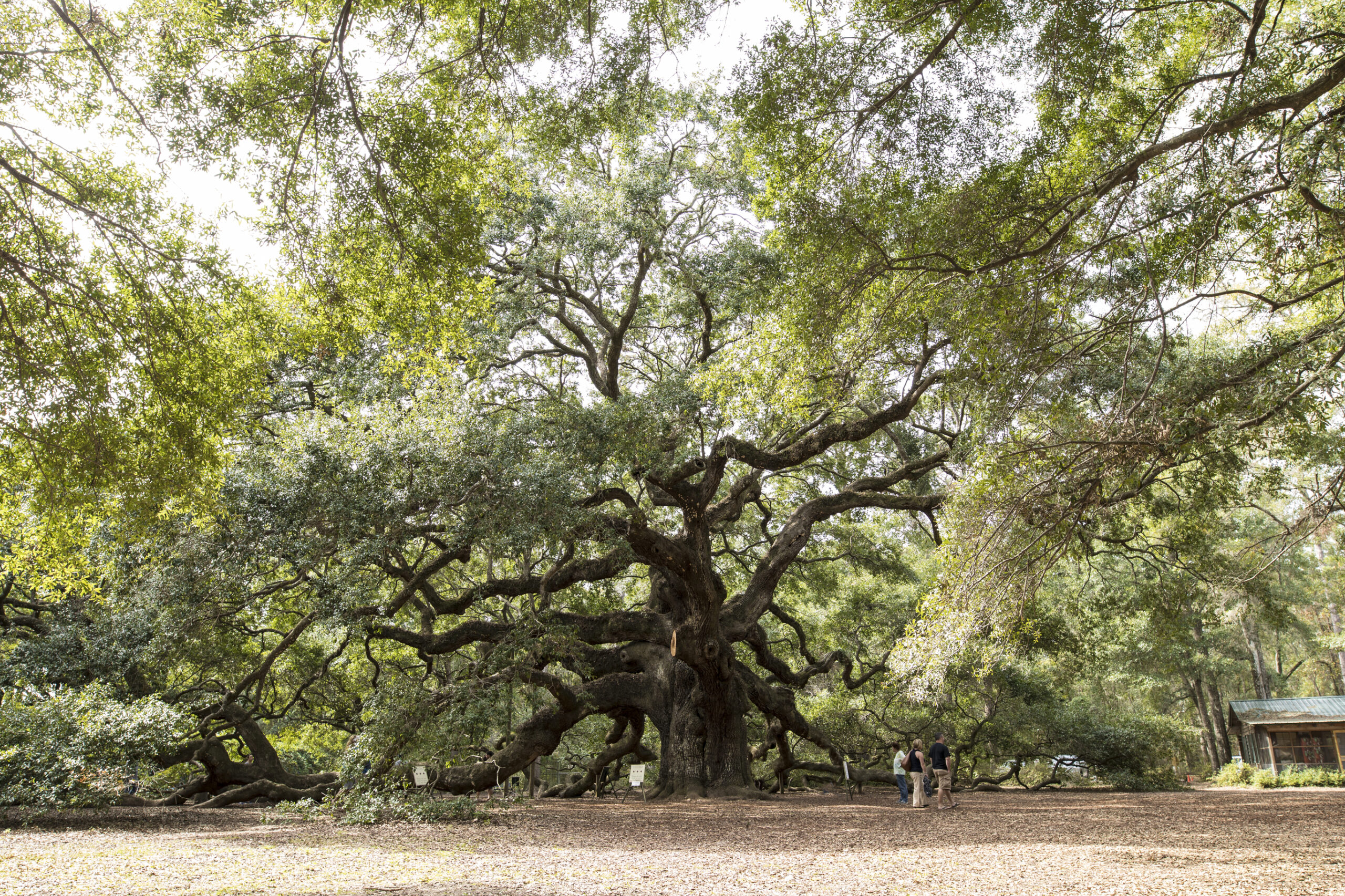 Like any other tree, Bamboo is one of the trees that provide a lot of life lessons. If you once heard a lot of success stories referring to bamboos, it’s about success that doesn’t happen overnight. To build a strong foundation, you must work for it. To name a few, those are the life lessons of bamboo because bamboo takes years to grow, but once it grows it’s strong. Besides, bamboo is good for the soul. Here in Kyoto, Japan, bamboo is preserved for tourists and the environment. You can often see a bamboo plantation near Buddhist temples and shrines. Bamboos here represent good luck and strength. One of the greatest things you will experience when you visit a bamboo forest is the soundscape that you can hear and the wind that passes your ears. 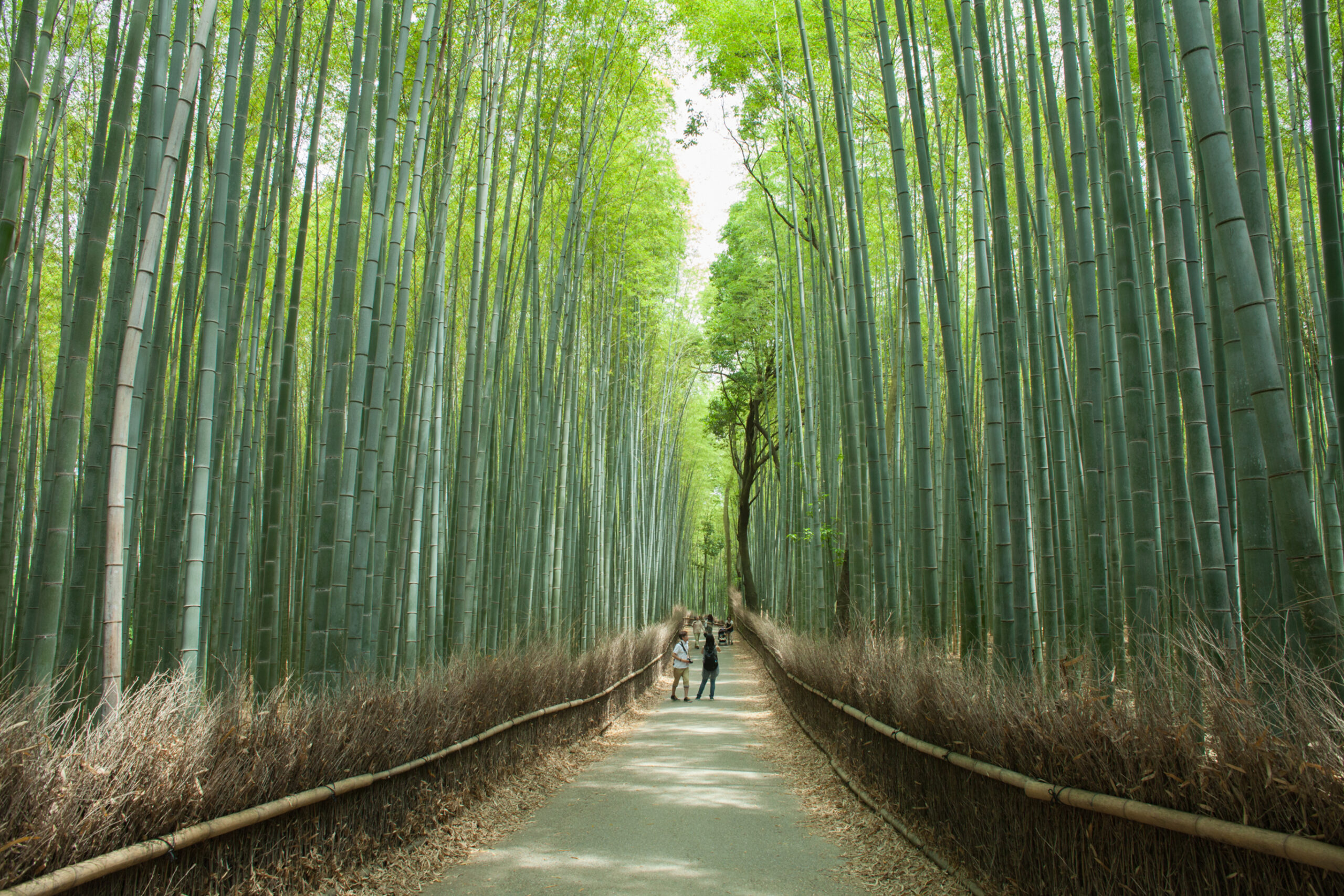 Giant sequoias are fewer in numbers found in portions of the Sierra Nevada in California where we can find its visually striking and dominant size. Describing the feeling when you got to walk in the hardest groove just feels safer running away from dinosaurs. Ranging from ten thousand sequoia trees per grove, these giant sequoias are approximately 4,000 to 8,000 feet in elevation, 8 feet in diameter, 3 feet in thickness, and can live up to 3,000 years.

The rolling plateau between roads in riverside in Sequoia National Park contains hundreds of unlogged trees and scattered meadows. It’s the best place to take instagrammable photos in high shots, considering it’s characterized by different sizes and numbers of trees that can be put on the map. It’s good for hiking and camping if you do so. 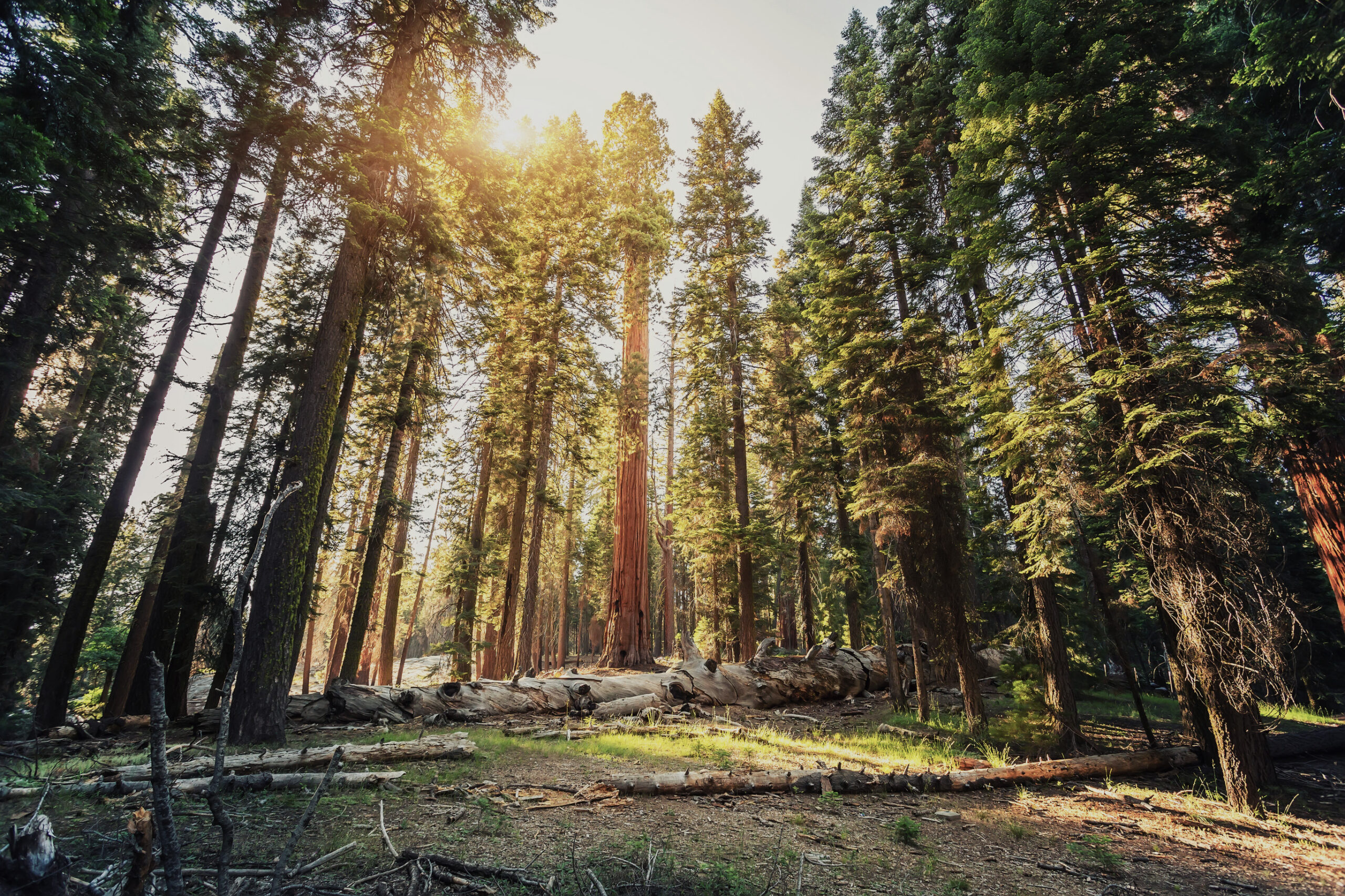 Its roots signify the strength of trees! This species is ecologically important in Ta Prohm monastery in Cambodia, where it is mostly the center of strangler figs. This tree’s spaces in its body are the home of many breeding bats, birds, and other flying creatures. Perhaps more importantly, this tree provides food to animals during scarcity. It is one of the untouched gems in this place. It is intentionally preserved to ensure that visitors can witness its beauty over the years. Since the 20th-century strangler figs have become part of the larger temple called Angkor Wat in the place. 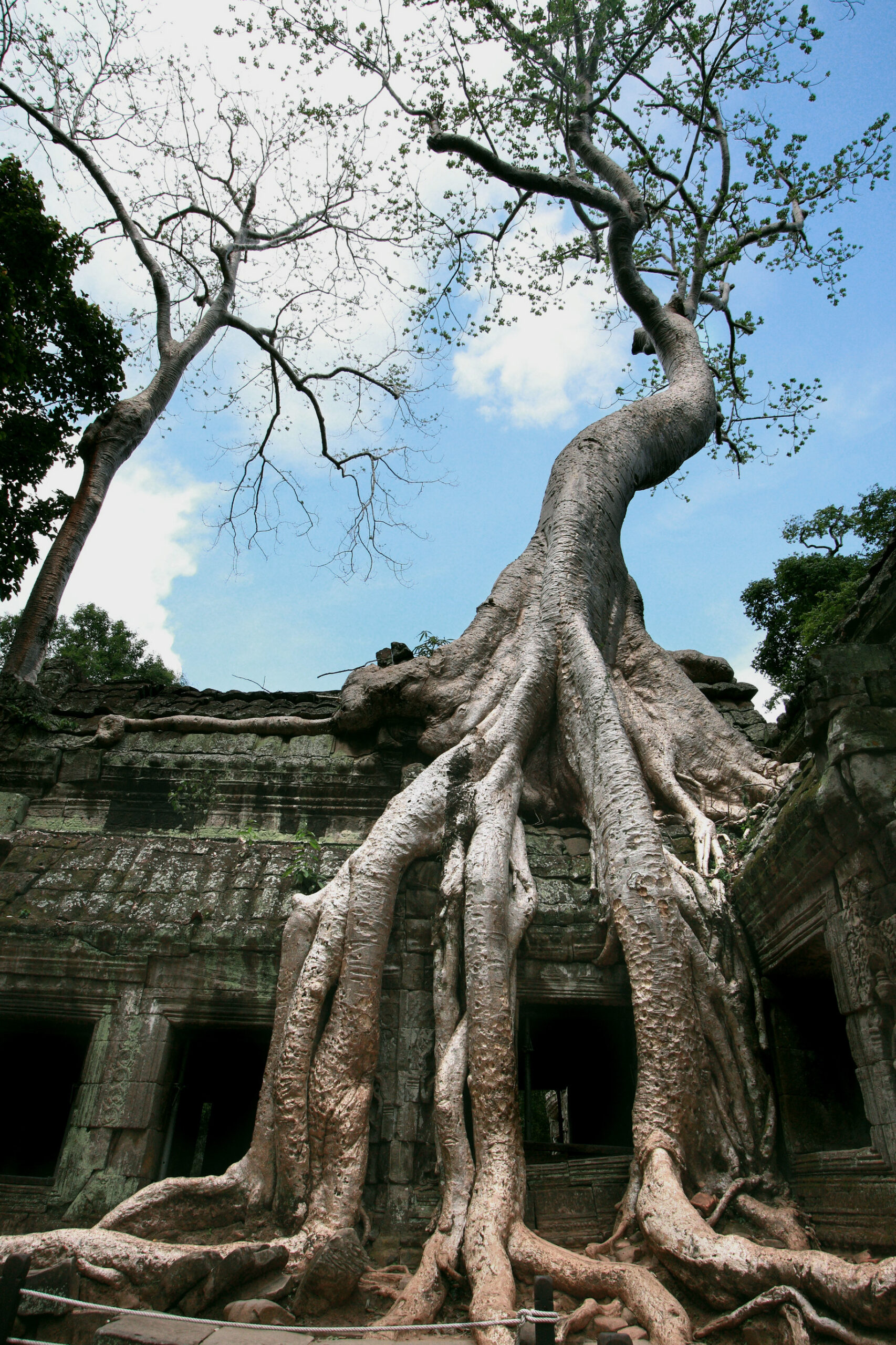 Look up and see the tree that is the only ‘living work of art’ and is named as one of the ‘most colorful trees’ in the world because of the array of colors that it shows. The rainbow eucalyptus can be found in parts of Mindanao, an island from the southern part of the Philippines. It grows over 200 feet or 60 meters. The trunk of the tree sheds camouflage causing the tree to look like a rainbow!

This tree hasn’t just had an attractive physical appearance but also has many uses. Traditionally, folks use it for medicine; treat wounds and asthma. Its leaves are for repelling mosquitoes and locals use its entire body to make paper products. This tree is also present in Hawaii in its botanical garden. 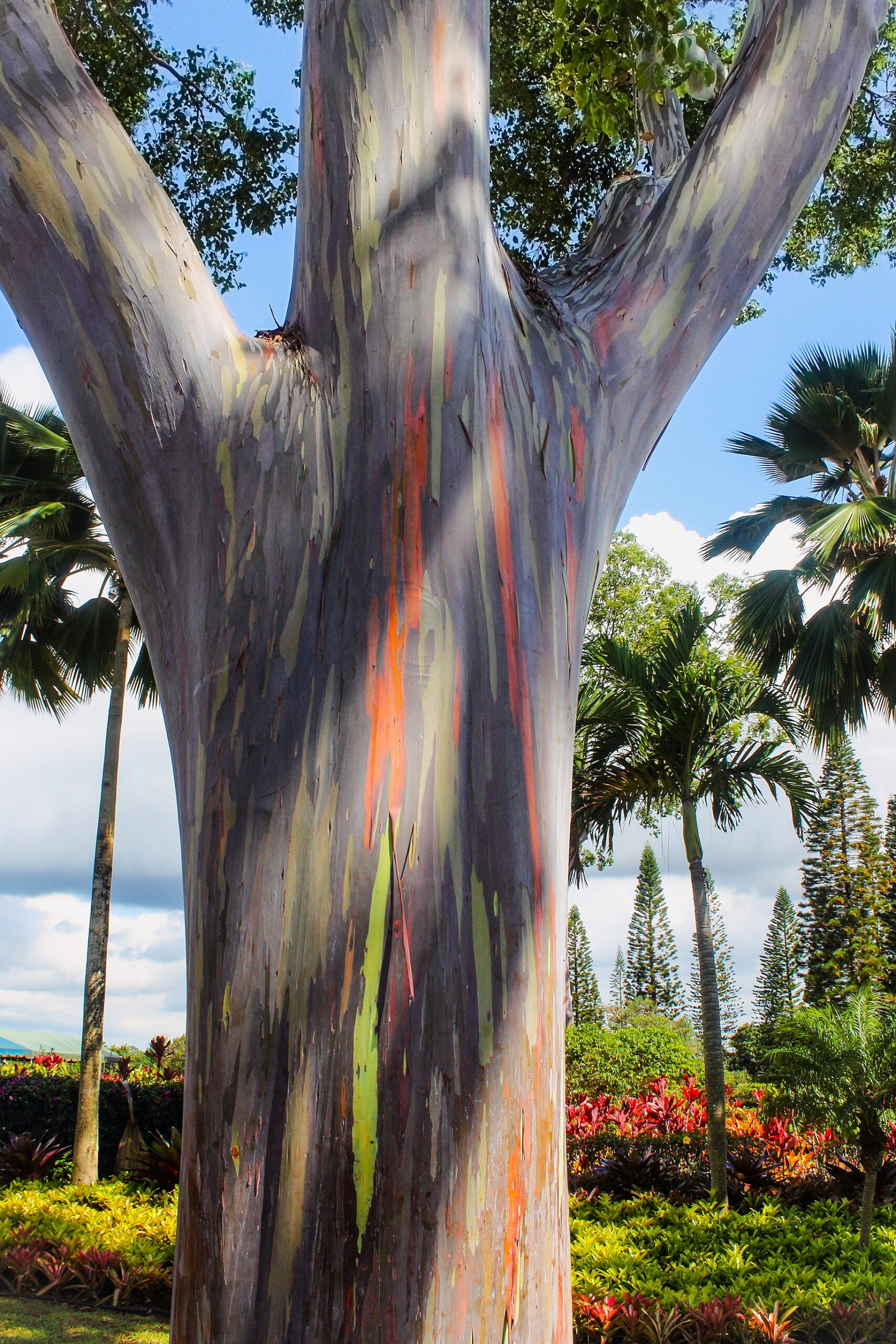 Two hundred miles on the coast of Yemen is the unique feature of Socotra, an otherworldly tree species that has a mushroom or umbrella-like appearance. What makes this tree more appealing is the red resin inside its trunk, which is why it is called the ‘Dragon Blood Tree.’ This natural species have been harvested to supply varnishes, dyes, and medicines. Only experienced harvesters can extract its resin as it puts the person in danger if it is not done accordingly. This tree is endemic and can only be found on one island. It was such a mundane moment to witness these trees grow and harvest. 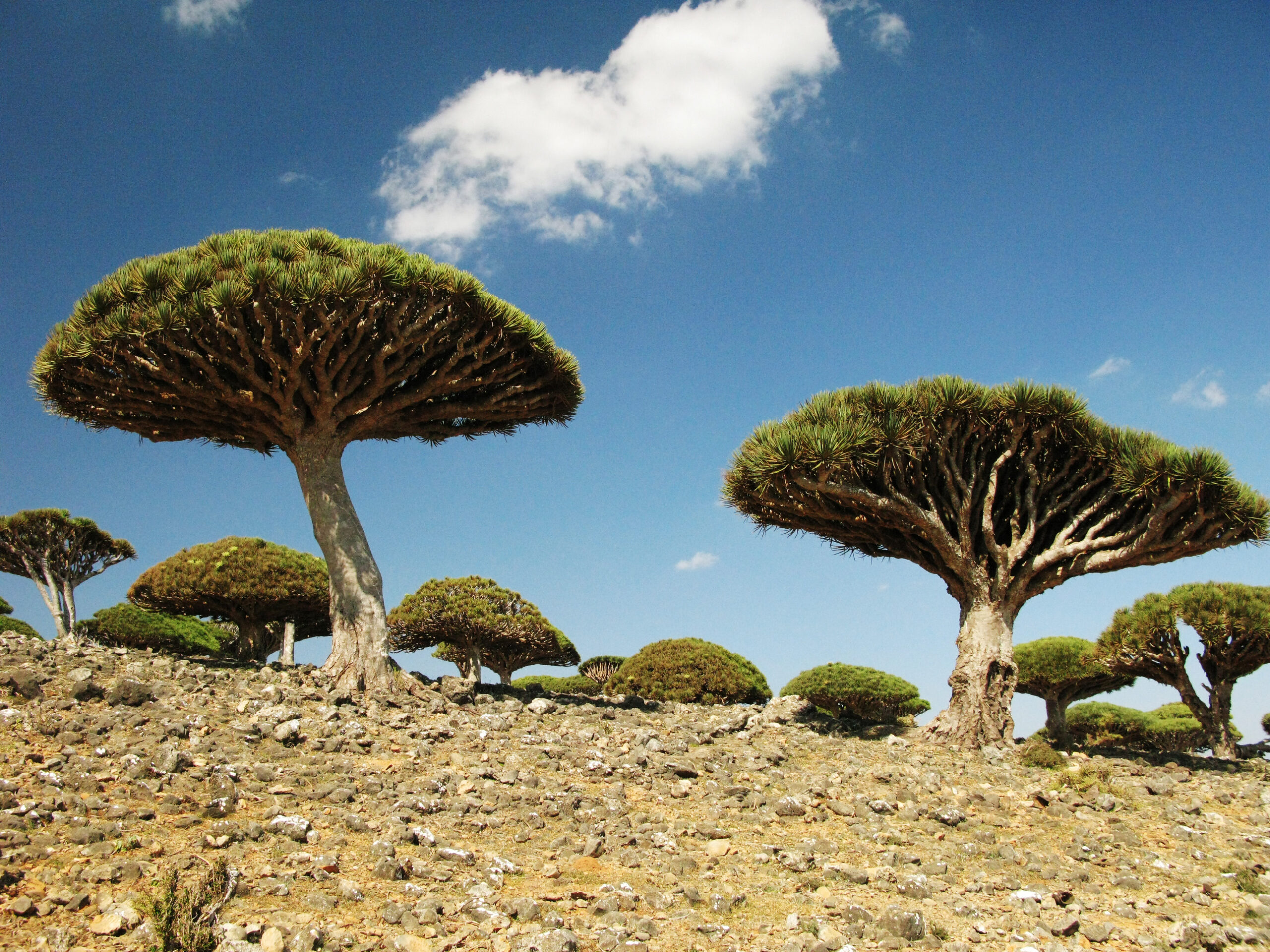 The most amazing hedges in the world can be found in Scotland that were planted in 1745. It’s the well-known hedges that are noted in the Guinness World Records as the longest and tallest hedges in the world. The height of a single hedge can reach 30 meters and 530 in length. The picturesque stretches of hedges can be found near Blairgowrie in Perthshire. The men who planted it were killed in the battle and its hedges remain in the heights of their memories. 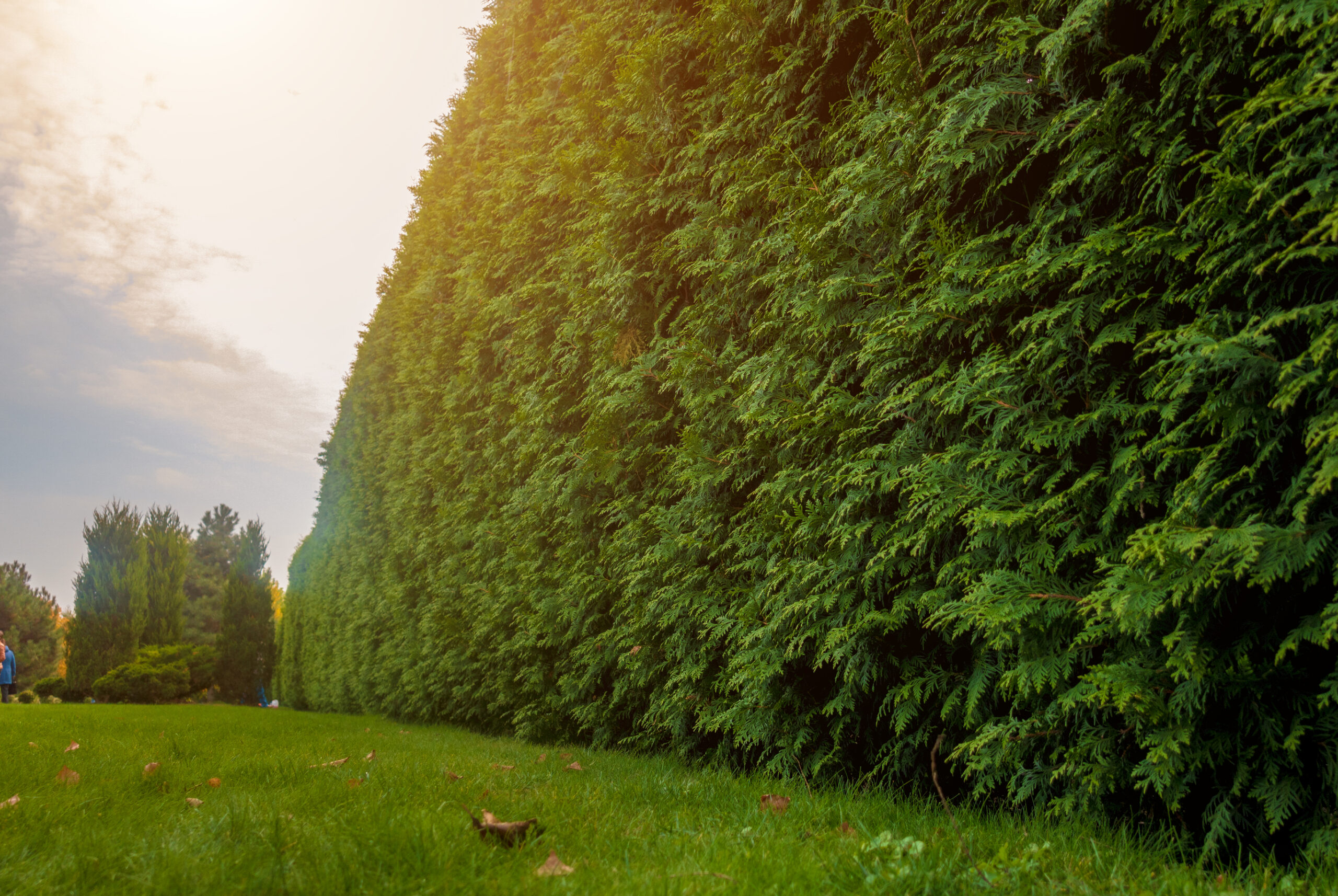