10 Exciting Things To Do In Rome

10 Exciting Things To Do In Rome

Rome, the Italian capital, is one of the most magnificent and ancient cities on the globe. Rome has a rich history that dates back over 2500 years and has been the hub of culture, politics, power, and development since its commencement. The city’s establishment is deeply entrenched in tradition and mythology, and there are several contrasting explanations of how this fantastic place was constructed. Several Roman emperors governed the mighty Rome, and this is the place that gave birth to the great Roman Empire.

Over time, many statues, palaces, and sanctuaries were built in the city, and they now act as charming tourist spots and a remembrance of the city’s illustrious past. With sights such as Vatican and Colosseum, it’s no surprise that Rome ranks among Europe’s most visited tourist destinations.

Let’s look at the most exciting things to do in Rome: 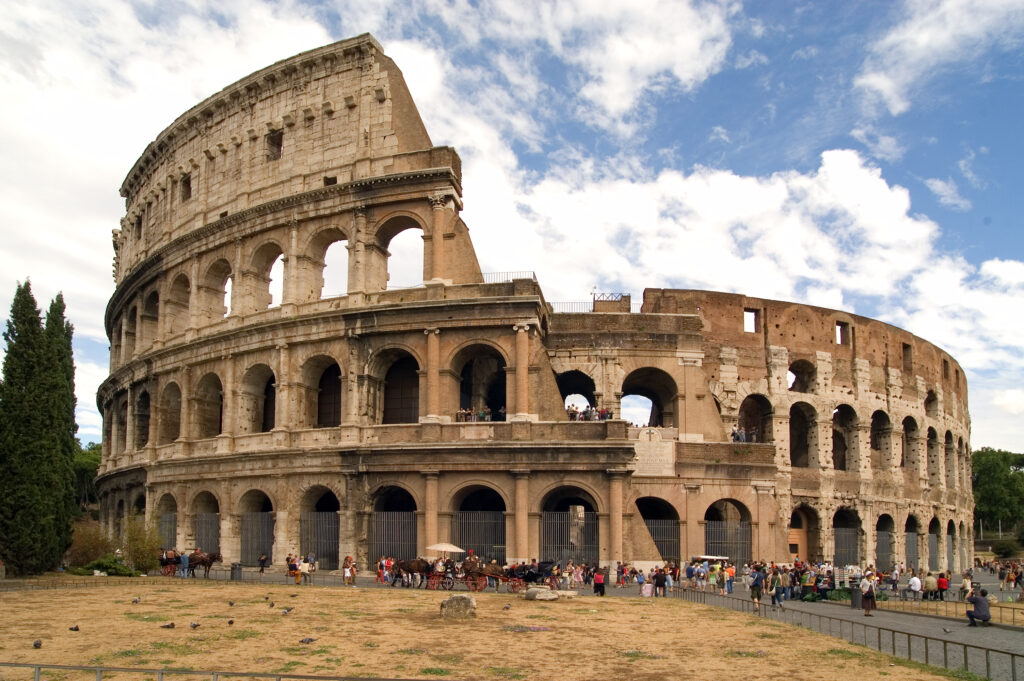 This massive structure is one of the most legendary and historic landmarks globally, and a visit to Rome would seem incomplete without touring the Colosseum.

The Colosseum, one of the oldest structures in Rome is estimated to slightly accommodate 80,000 views at its peak. It was in this building where games, gladiator competitions, and various forms of entertainment used to be held and more often attended by Roman emperors.

Colosseum is easily reachable and possesses a metro station nearby, thanks to its location to the southwest of the main terminus train station.

Admire this iconic structure from all perspectives. Ensure you put up with the long queues and get inside to appreciate the magnitude of this classical celebration venue greatly. 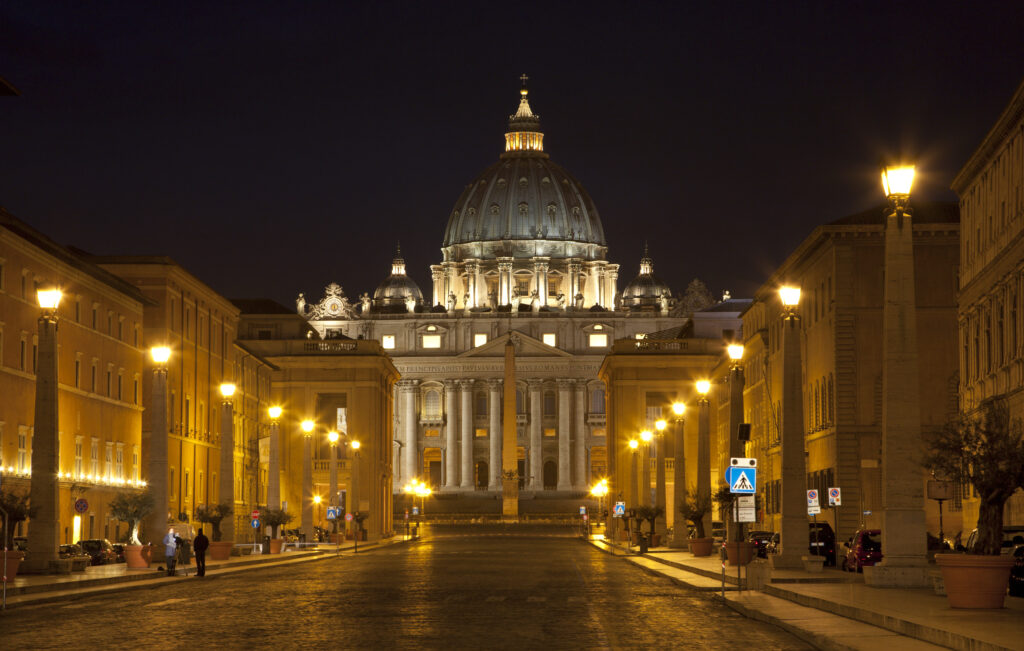 St. Peter’s Basilica is probably the most notable and renowned religious building in the world and is regarded as one of the holiest sanctuaries for Catholic followers. Situated at the farthest end of St. Peter’s square, the Basilica boasts a gorgeously designed front exterior surmounted by statues of Jesus and the Apostles.

The architecture and decoration within the Basilica are simply appealing, and it is considered one of the most magnificent religious buildings in the world.

A visit to St. Peter’s Basilica will leave you surprised by the colossal amount of decoration and detail and the manner in which light falls in thrilling rays at various points in the course of the day.

Visible in the vast Dome and beautiful Gloria sculpture is the handiwork of Bernini and Michelangelo, who made contributions to the design.

Keep in mind to climb to the apex of the Dome to have an elevated view of St. Peter’s Square. Also, walk to the Dome’s upper part and explore Rome’s paranormal views, then head underground to marvel at iconic grottoes. 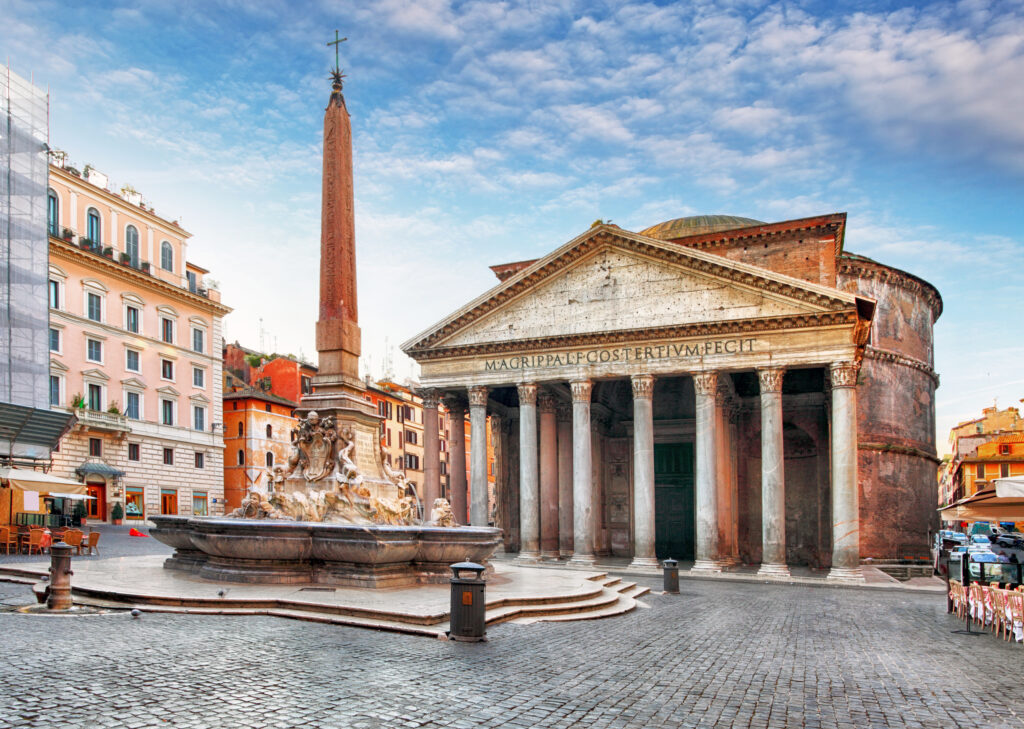 The Pantheon was built in 118 AD by the then emperor, Hadrian, and rests on the same site where an earlier sanctuary launched by Agrippa (emperor’s lieutenant) stood.

At the facade of the building is a rectangular porch covered with enormous columns and a tribute to Agrippa on the triangular pediment.

The inside of the Pantheon contains a splendid dome that features a set of stone patterns and a central coffer that permits light to pass through.

Located in downtown Rome, the Pantheon is a real centerpiece and another must-see building. 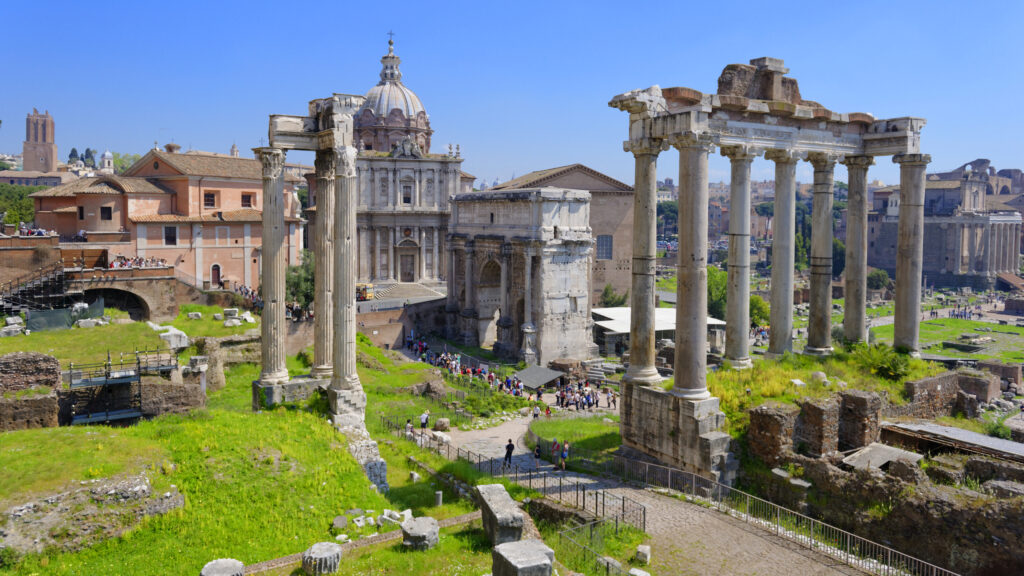 Roman Forum, an ancient site comprising multiple ruins that were the hub of Roman public and political life, is arguably one of Italy’s most fundamental Roman ruins.

It is home to several arches, squares, and temples, such as the Arch of Severus and temples Vesta, Titus, and Saturn.

A significant number of these structures still exist to date, and you can easily locate the various arches, building foundations as well as walls.

Situated alongside the Altar of the Fatherland and Colosseum, the Roman Forum is a crucial destination worth visiting.

Buy tickets and take your time to check out the multiple ruins featured in the Roman Forum while acquainting yourself with the site’s history. 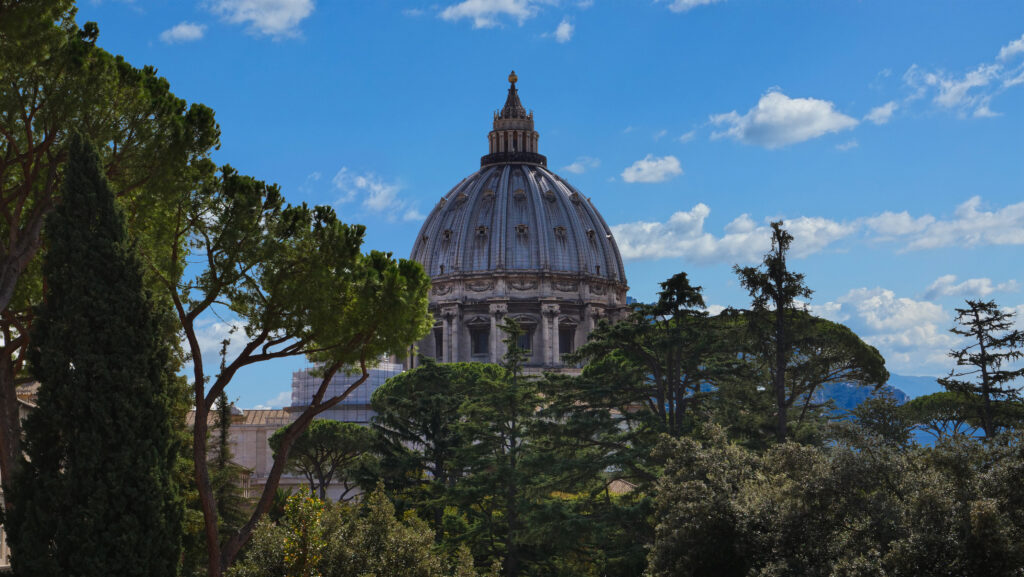 The Sistine Chapel, the section of the Vatican museum complex, is one of the most celebrated holy chapels globally and has an impressive volume of detail and iconography.

The Sistine Chapel is where the selection of the new pope takes place as well as the papal enclave. It’s located at the Apostolic Palace in Vatican City and was vastly restored in the 1400s.

The Chapel is especially notable for its immense and comprehensive decorations, namely the ceiling artwork and the Last Judgement fresco by Michelangelo.

The two awesome pieces of art are regarded as some of the most famous and valuable in religious history.

Don’t forget to commit ample time to view this impressive structure and the admiration held within. 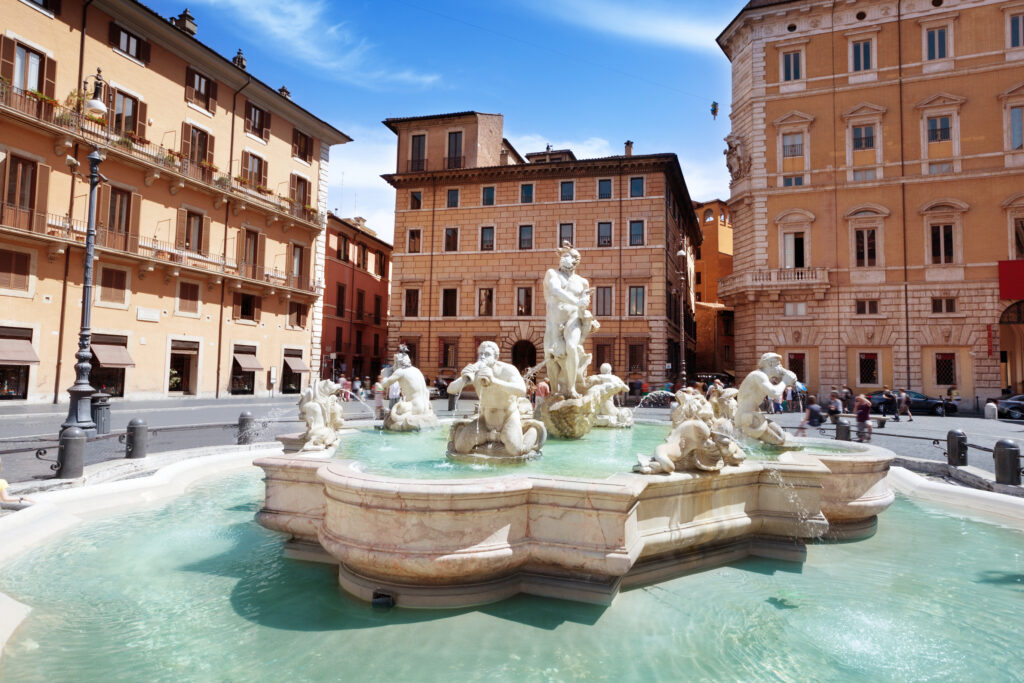 Constructed in the 15th century, the Piazza Navona is located at the stadium of Domitian. Since its construction, it has continued to be an attractive destination for visitors worldwide.

The Piazza Navona is an amazing place to tour while walking along the city center, thanks to its proximity to the Trevi Fountain and the Pantheon.

The extensive square is normally packed with artists and street traders, and the neighboring buildings frame the open space magnificently.

Recognizable components of the square comprise the Palazzo Braschi, Fontana del Moro, Palazzo Pamphilj, Saint Agnese in Agone church, and the Fountain of Neptune with their wonderful statues. 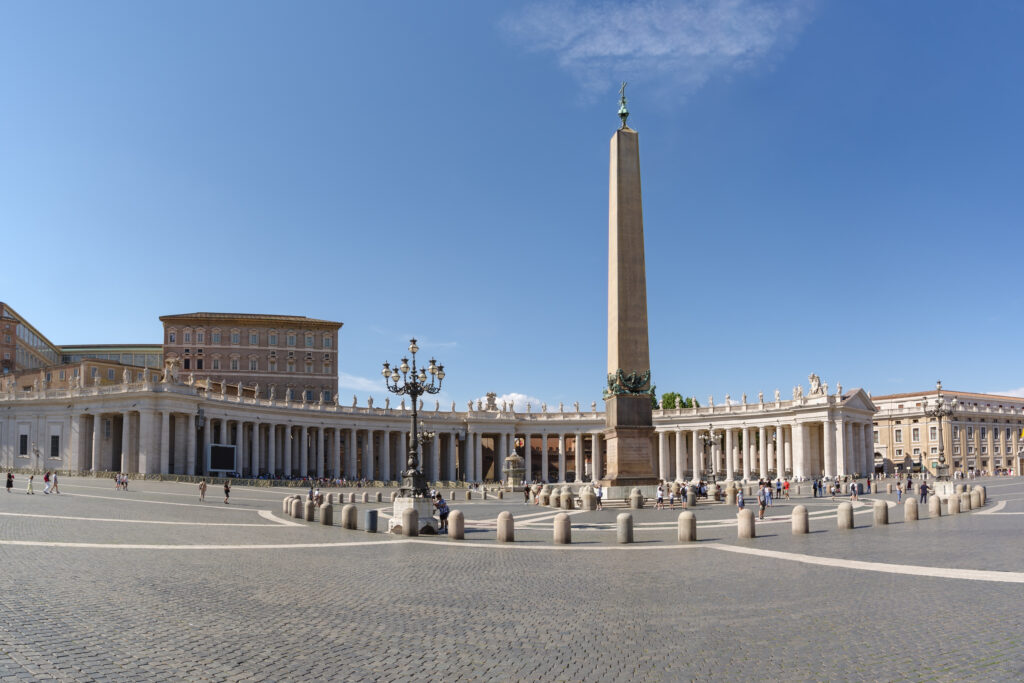 Rome is the home to the Vatican, which is considered an independent state within a country.

The Vatican is actually the most celebrated religious site all over the world, and St. Peter’s Square is an illustrious place where many important events have occurred.

St Peter’s Square is situated on the facade of the Vatican state and is actually circular in shape. It’s surrounded by two massive sets of colonnades with attractive statues of different religious personalities and former popes.

In the middle of the square is the imposing obelisk, which was, in fact, obtained from Nero’s Circus and looks more Egyptian than Roman.

At the distant end of the square lies the famed St Peter’s Basilica, and outside of this is a set of chairs well-arranged for papal ceremonies.

Comprehend the magnitude of the square, observe the crowds of people rushing to catch sight of the Pope, and use this to set your visit to the Vatican in motion. 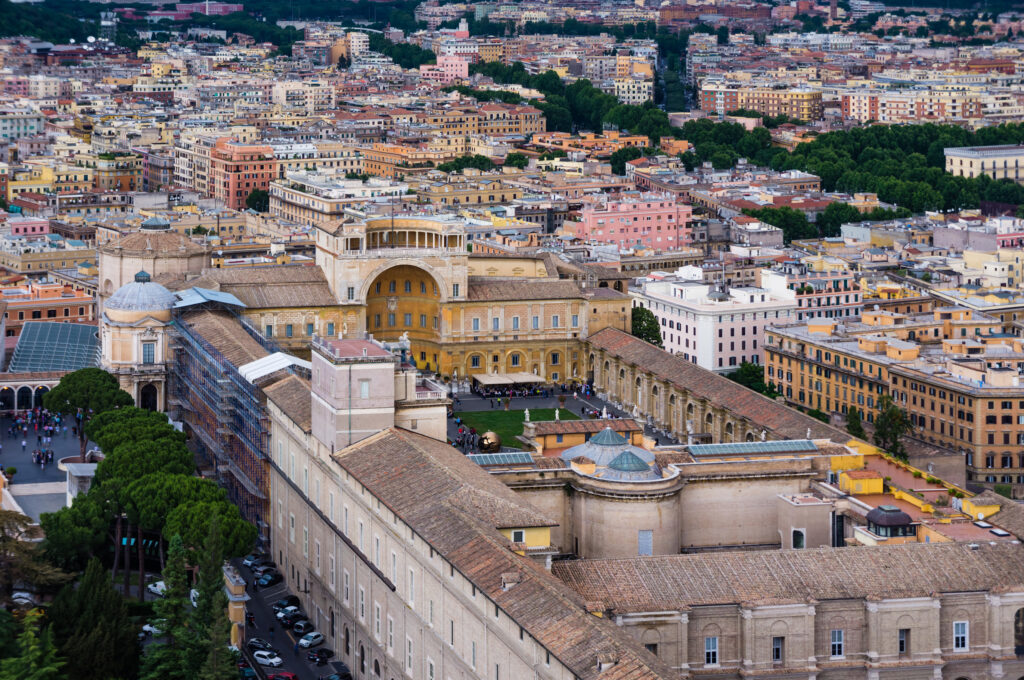 This valuable collection of classical and historical artwork has taken popes many centuries to assemble and features some of the world’s most significant pieces of artwork.

Situated inside the boundaries of the Vatican state, the museum houses more than 70,000 pieces of artwork.

You can buy a joint ticket to check out both the museums and the Sistine Chapel, and it is recommended to dedicate adequate time to explore the two exhaustively.

Divided into multiple different parts, the museums comprise the Museo Gregoriano Etrusco, Museo Pio-Clementino, Museo Gregoriano Egiziano, and the Museum Chiaramonti, all of which feature separate artworks and themes.

Remarkable pieces comprise Entombment of Christ by Caravaggio, Transfiguration by Raphael, and the sensational gallery of maps. 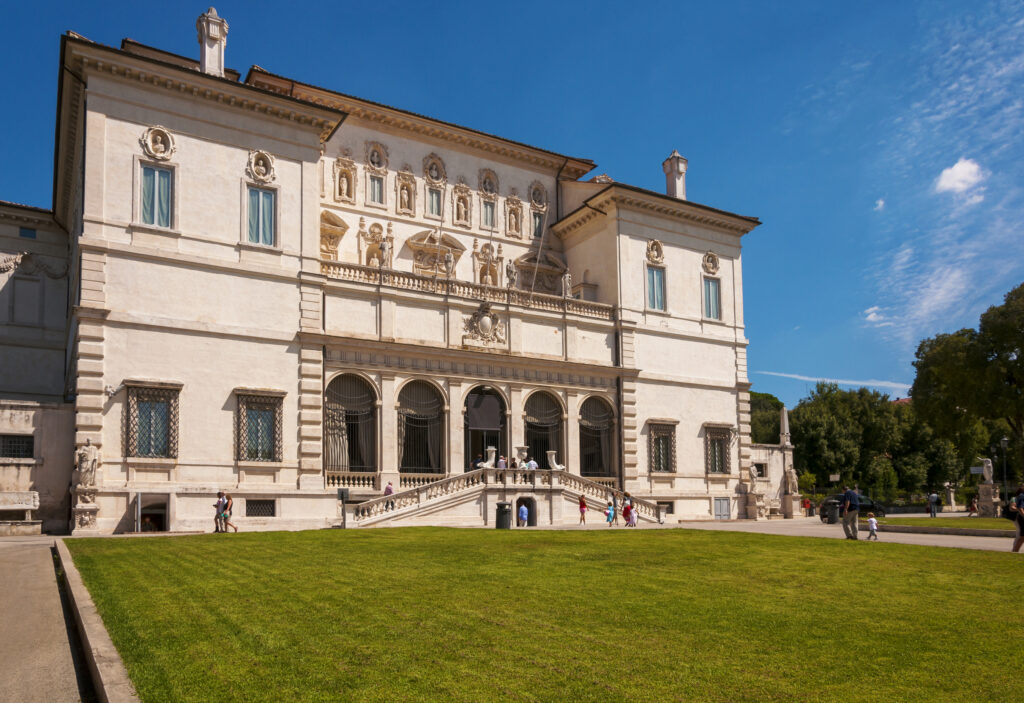 Galleria Borghese is an iconic art museum located at the Borghese Villa complex and features a significant number of impressive antiques, sculptures, and paints.

The Borghese complex was constructed in 1903 and is located in the northern downtown of Rome alongside the Via Pinciaana road. The majestic building possesses a stunning and ornate front exterior that has numerous stones and decorations.

Some of the notable collections found and spread over this extensive museum’s twenty rooms include the work of Ruben, Raphael, Titan, and Caravaggio.

Allocate adequate time to check out the artistry work on display, as well as the great Borghese Villa gardens. 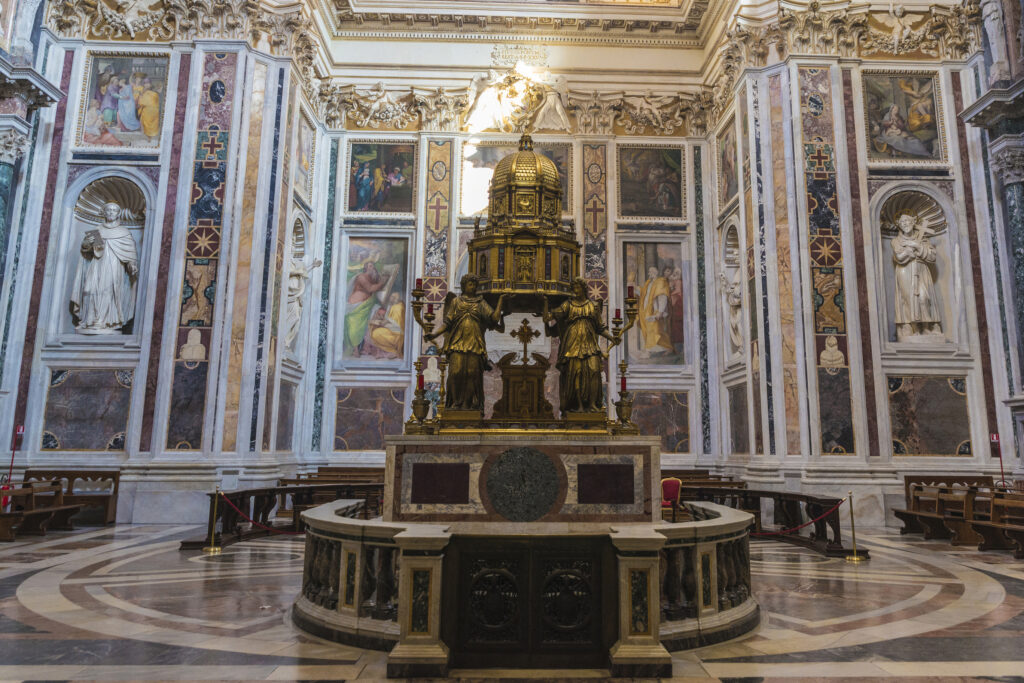 Rome is filled with outstanding worship and historical structures, one of which is Basilica di Santa Maria Maggiore.

Located in the Piazza, Basilica di Santa Maria Maggiore stands as one of the largest religious buildings in Rome.

The exterior facade of this glorious building contains a central range of stone columns filled with statues and multiple inscriptions.

In addition, there is a huge bell tower that rises past the neighboring buildings.

Although the outside is amazing on its own, the inner side is extremely beautiful. It comprises a significant amount of comprehensive paintings, gold decorations, and fresco paintings on both ceilings and walls.

Worthy of attention is the Borghese chapel, which contains several incredible gold sculptures and paintings.

If you’re planning to visit Rome for a vacation, honeymoon, or lone adventure, consider visiting and exploring all the discussed-above sites. Rome has something for everyone, and you can be assured that visiting some of these spots will create exciting and memorable experiences in your lifetime. Keep in mind to allocate adequate time to exhaustively explore all of these places before you conclude your trip to the Italian capital.