It’s more fun in the Philippines! Although the country is known for its beautiful tropical beaches, witnessing these grand, colorful festivals are a must if you want to truly immerse yourself in the culture. There are over 42,000 festivals celebrated across the country, each one tells the unique history of the place and where the festival originates from.

Festivals in the Philippines are like no other, they remain an integral part of local culture. It’s attended, not only by Filipinos, but people coming from different parts of the world to witness the most celebrated dates of the year. From the most colorful costumes to contagious dance steps, and to the music brought by customized musical instruments, surely those who have witnessed will miss the atmosphere the native celebration brought to everyone.

While some festivals were canceled due to the pandemic like the Sinulog Festival, there are some that still found ways to celebrate their festivals. For Ati-Atihan 2021, everything was done digitally, from pre-filmed performances to competitions, the local government made sure that the festival was still enjoyable even during the pandemic. Festivals like the MassKara Festival, on the other hand, are still ongoing and tourists are allowed as long as they follow the tourism guidelines. The MassKara festival usually has the following events: MassKara Street Dance and Arena Competition, street parties, float parade, food fair, and the MassKara Queen Pageant.

These festivals mark the Philippines’ rich and colorful culture, history, and creativity. Traveling to these festivals is definitely worth the experience.

Although watching festivals physically is the most festive and hyper feeling of all time. Other provinces in the Philippines are switching festivals virtually, and to know more before watching it in reality, we have listed below some of the most and the biggest celebrated festivals in the country, so that the next time you visit the place, you’ll have an idea of what and when to do so.

Ati-Atihan, meaning “to act like Atis” (another spelling of “Aetas”) is celebrated to pay homage to the Child Jesus, or Santo Niño. Much like the Sinulog Festival, it is also celebrated every third Sunday of January. Known as the “Filipino Mardi Gras,” street performers are adorned with vibrant-colored tribal outfits to resemble the Aetas, the original settlers of Panay. They would perform dances inspired by the Aetas alongside a type of dance known as “snake dancing.” With a highly energized crowd, rhythmic drum beats, and a booze-filled celebration, the fun doesn’t stop during the parade but carries on throughout the night.

One of the most celebrated festivals in the Philippines, the festival is held to celebrate Santo Niño de Cebú, the statue of a Child Jesus handed to the Rajah Humabon of Cebu by the Portuguese explorer Ferdinand Magellan in 1521. Held every 3rd Sunday of January, it’s also popular among tourists because aside from the grand parade, there are street parties everywhere throughout the evening. Beer and any type of alcohol are sure to be present on every corner, so much so that locals would most likely offer you one. The end of the festival is marked by a grand fireworks display.

Known as the “City of Smiles,” this festival definitely lives up to the name. People parade the streets wearing striking masks featuring big smiles, this festival is held every 4th Sunday of October. Locals would prepare performances and carefully crafted costumes, they would dance to folk songs and even Philippine Jazz in the streets. Tourists are also more than welcome to join in and wear the same striking masks alongside the locals.

The Panagbenga Festival is a month-long flower festival in Baguio held every February 1st. Panagbenga, a Kankanaey term meaning “season of blooming”, pays tribute to the city’s flowers and is a way to uplift the spirits of the people from the devastation of the 1990 Luzon earthquake. Signature events of the festival include interactive art projects where children can paint banners used in the floral float parade, numerous booths also lined the streets that offer free face painting and henna tattoos, film showings, games, and even drinks to adults. The day ends with a mini-concert and a grand fireworks display. 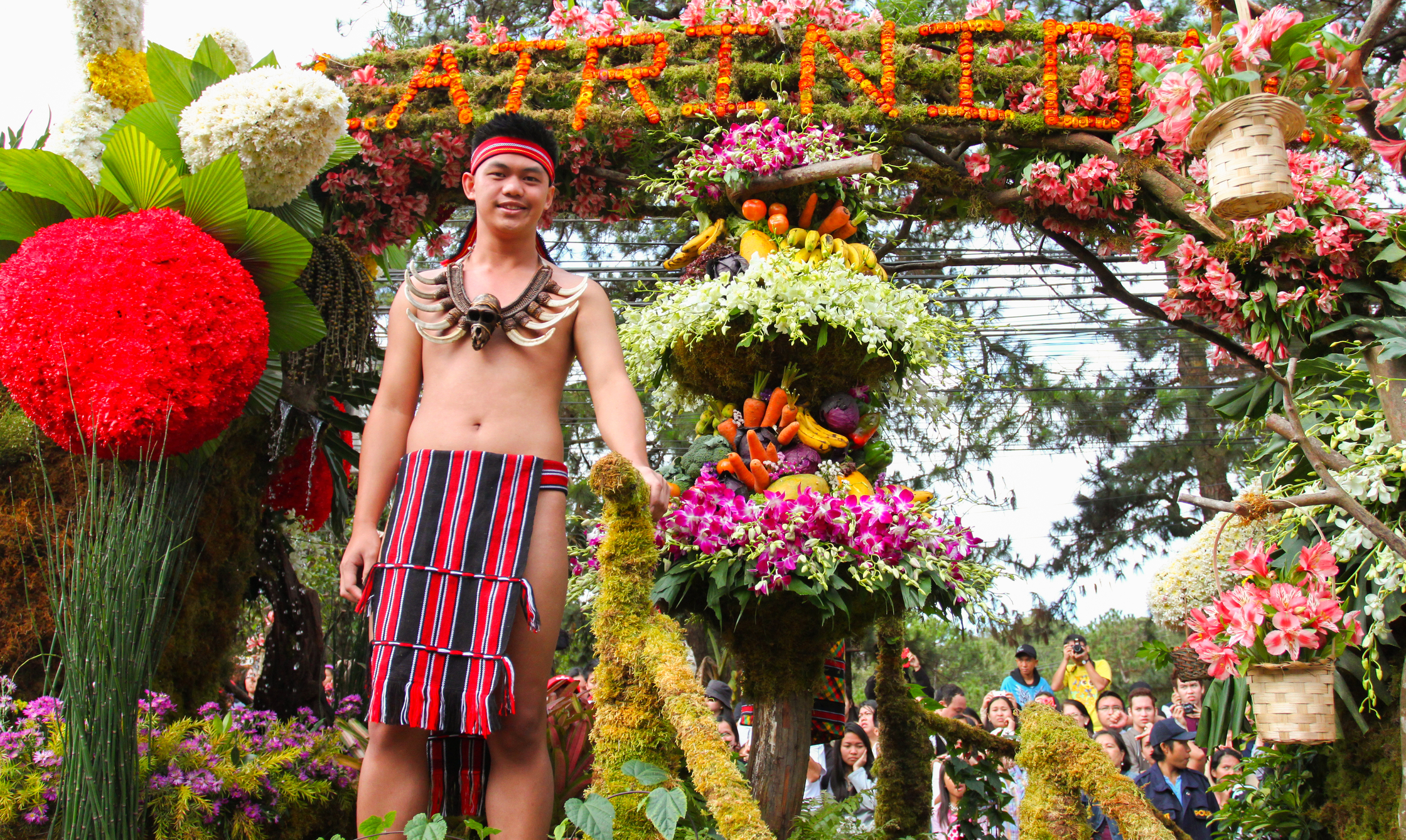 Another festival commemorating the Santo Niño, Dinagyang means “merrymaking” in Hiligaynon. It’s celebrated every 4th Sunday of January, it’s divided into three parts: Friday’s Fluvial Procession, Saturday’s Kasadyahan Cultural Competition and Sunday’s Ati Tribe Competition. The difference between the Sinulog, Ati-Atihan, and Dinagyang Festival is that in Dinagyang there are a total of five performance stages around town and only those with tickets can watch. Nevertheless, you can still enjoy the Floats of Parade Lights and street performances for free.

Held every May 15, this festival dates back to the 15th century from when farmers used to offer their harvests at the foot of Mount Banahaw. The Pahiyas Festival is indeed one of the most colorful and vibrant festivals in the country, locals would adorn their houses with colorful decorations of the town’s own agricultural products and Kiping (a traditional Filipino leaf-shaped wafer made from glutinous rice). Even better, tourists are offered free fresh fruits and vegetables to taste and enjoy.

Really feel that holiday spirit when you attend the Giant Lantern Festival in Pampanga held every December. The whole city organizes a competition for the largest lanterns during the Christmas season, these lanterns would usually stand over 15 meters tall and are made up of locally sourced materials. From December to January, experience a true Filipino Christmas in San Fernando, Pampanga.

Another religious festival to celebrate the coming of Santo Niño, the locals would parade around the streets with their bodies and faces painted with vibrant colors of green and blue (or pintados), this symbolizes Leyte’s ancestral people. Annually held every June 29, dancers would also paint their bodies in patterns to resemble armor that represents past warriors. Witnessing the Pintados Festival is a rare experience of culture, it helps people see the true meaning and beauty of such tradition.

Angono, Rizal, otherwise known as the “Art Capital of the Philippines” is famous for the Higantes Festival. Every November 22nd and 23rd the town’s best craftsmen would create giant paper mâché and bamboo effigies — or Gigantes — to honor San Clemente, the patron saint of fishermen. This festival is perfect for art lovers, there’s also no shortage of fun since they hold a big party alongside the parade. 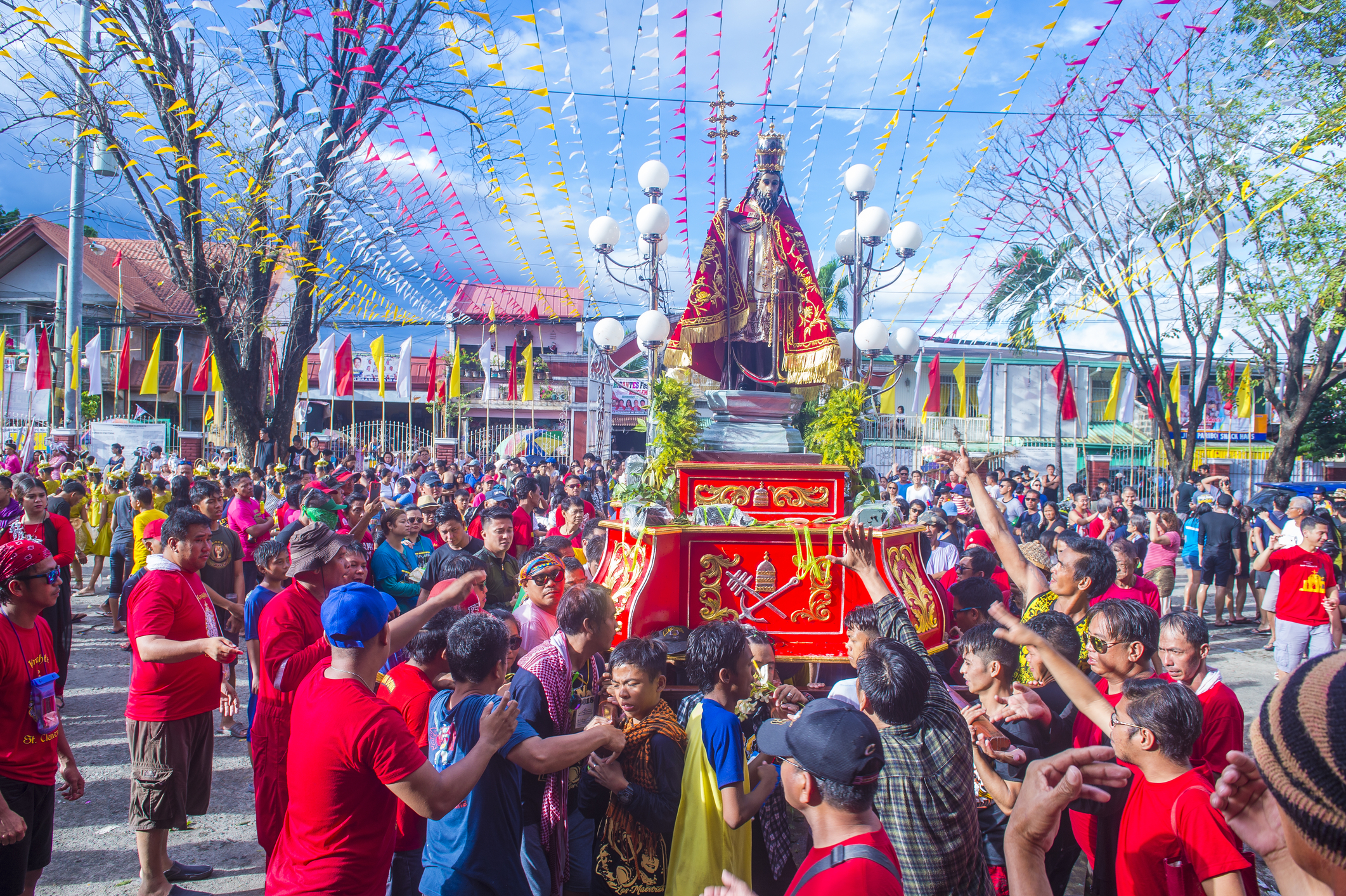 Parada ng Lechon or Parade of Roasted Pigs is celebrated every 24th of June in honor of St. John the Baptist. Lechon or roasted pig is never missing from a Filipino celebration, fiestas or festivals are no exception either, but in this festival, locals would dress the Lechon in fun characters and parade them across the town. There is also a water splashing activity, so you better prepare an extra set of clothes if you want to participate, and of course, the day ends with a huge feast of Lechon waiting for you. 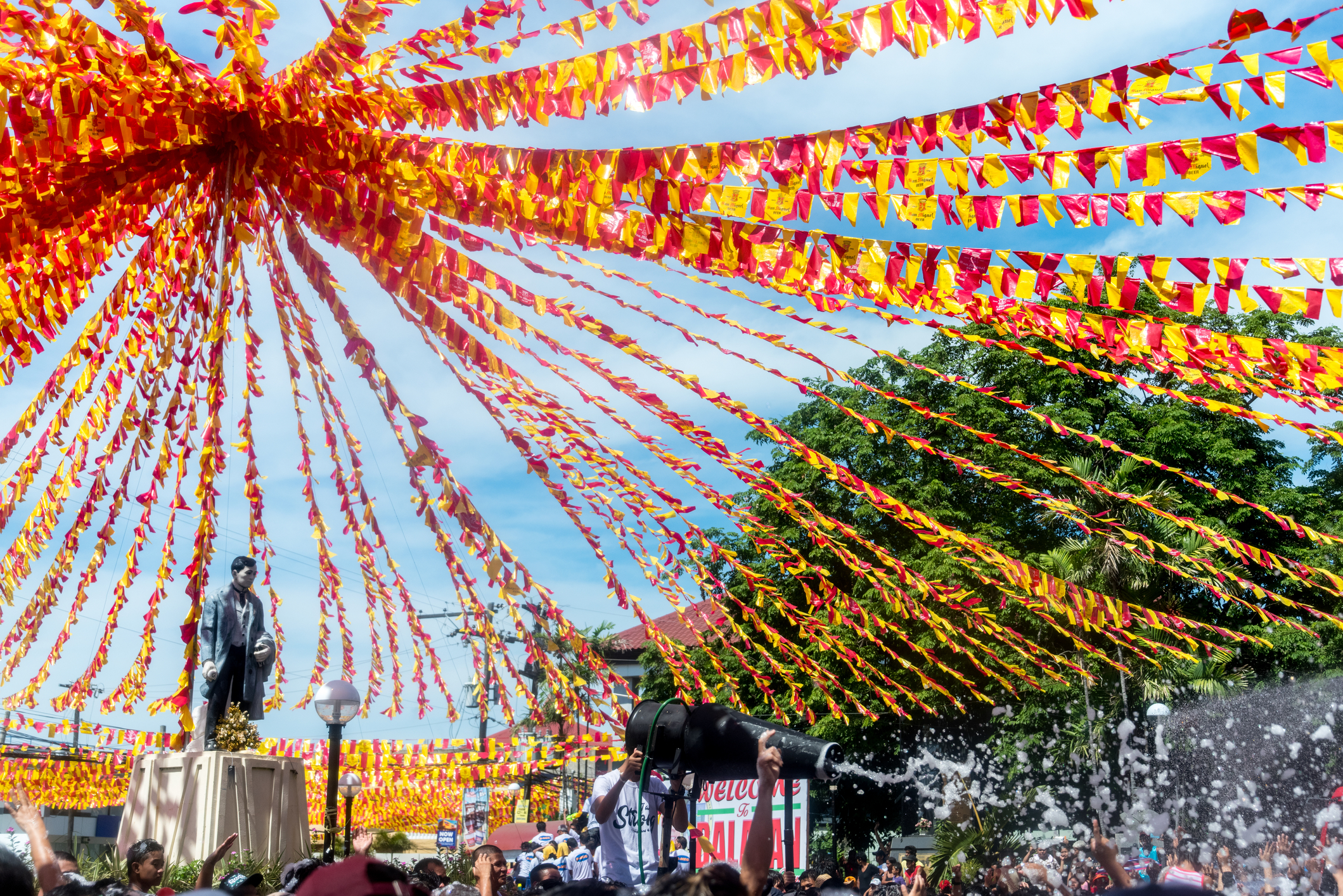 Dedicated to the half-blind Roman soldier, Longinus, who pierced Jesus in his side with a lance while he was on the cross, the Moriones Festival re-enacts the search for Longinus by centurions during Holy Week. Dressed in colorful costumes that attempt to replicate biblical Roman soldiers, the whole festival is basically a play in which you’ll be getting first-hand experience. 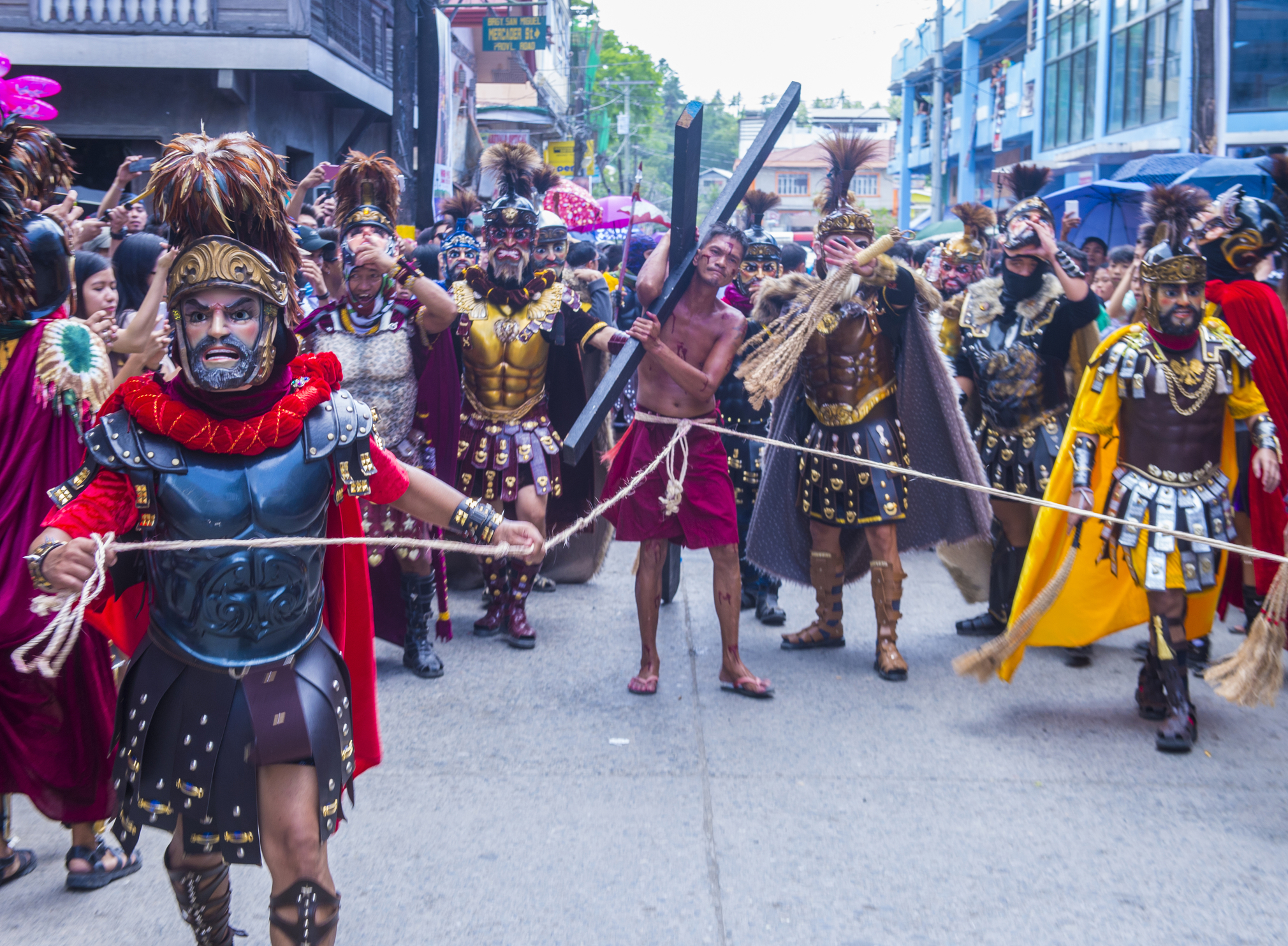 Celebrated from May 17 to 19, the Obando Fertility Rites Festival is for couples who want to have children, the ritual is believed to enhance reproduction and childbearing. It’s a joyous occasion characterized by traditional costumes, street dancers, and music. The festival also honors the three patron saints of Obando – San Pascual, Santa Clara and Nuestra Señora de Salambáo.

General Santos is the largest producer of sashimi-grade tuna in the Philippines. Celebrated every first week of September, the Tuna Festival includes the Tuna Float Parade, which marks the beginning of the festival. Locals would prepare colorful, ocean-themed floats. Another event worth waiting for is the Sugbahan sa Dalan, where a long line of grills is set up on the street with fish being grilled on the spot. The best part is that it’s completely free for both locals and tourists. 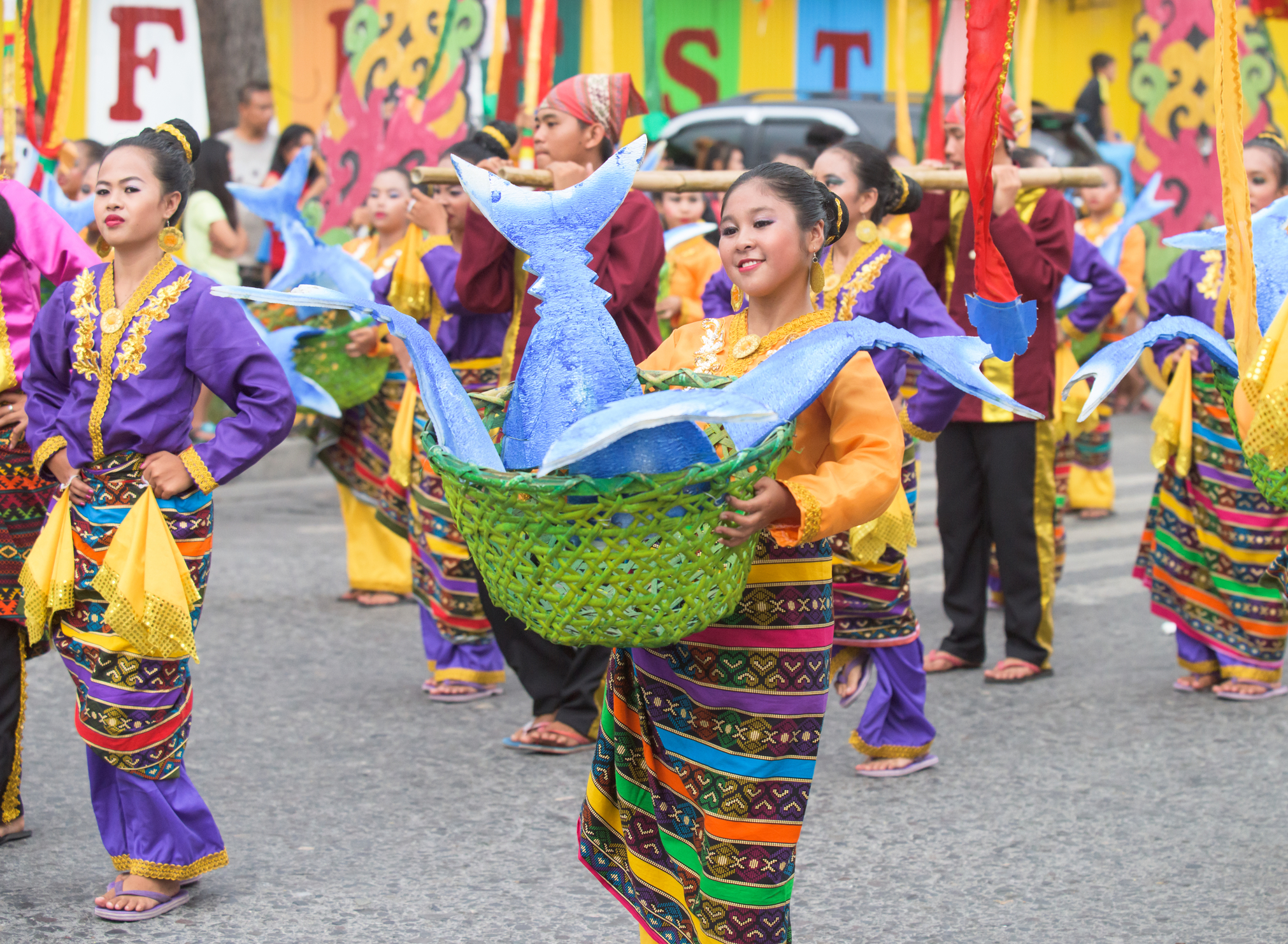 Initiated by the Department of Tourism, this annual sports festival features air-sporting events like hot-air balloon competition, aircraft maneuvers and precision flying, ultralights, RC Demonstration Flying, skydiving, aircraft rally, flag jump, balloon bursting competition, kite flying, trade fair, carnival rides, and nightly concerts. The Philippine International Hot Air Balloon Fiesta is always held at the Clark Freeport Zone in Pampanga held annually in March for four days. Creative, multicolored hot air balloons filled the airport and you can choose to ride one yourself alongside various activities like paragliding and a seminar on aviation. You can also eat and shop at the bazaar and food stalls while you’re there. 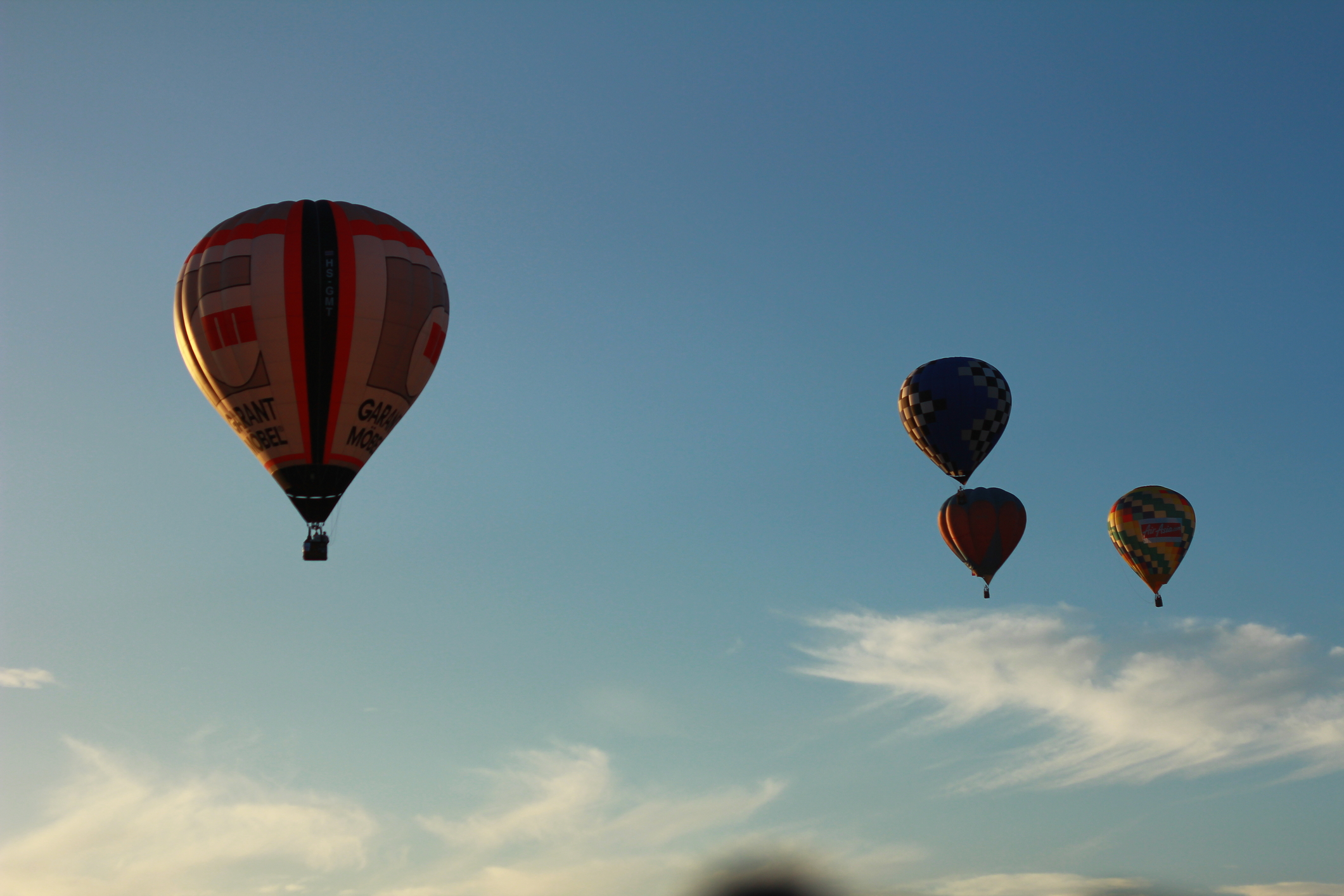